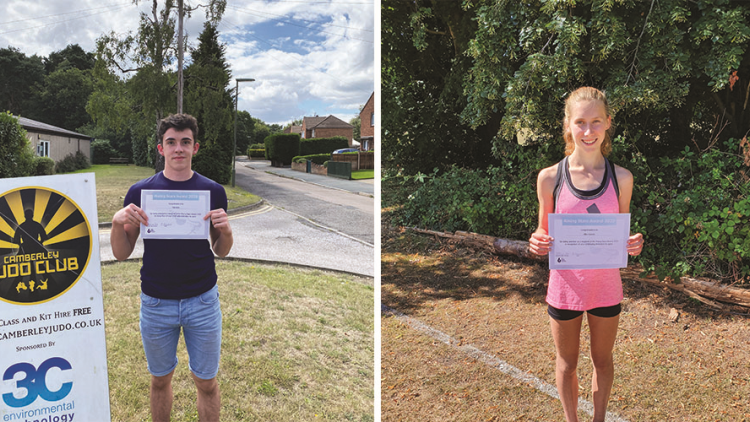 Two students have recently been presented with the 2020 Rising Stars Award. This is the third year of the awards which were introduced following the creation of The Stacey and Lucy Foundation.

The Rising Stars Award was introduced to help support College students to reach the next level in their chosen sport by awarding grants to go towards sporting equipment, transport costs and competition fees.  We received a number of applications from young hopefuls and, after reading them all, the families of Stacey and Lucy selected this year’s award winners. Congratulations to Alice Garner and Tom Kirk, now both in their second year at College.

Alice is a county level runner and current County Schools cross country and 1500m champion. Her long-term goal is to be a full-time athlete, competing on a global stage in cross country running and over middle and long distance track events. She commented, “I am over the moon to have received the Rising Stars Award. The Award will really help me towards achieving sporting excellence. I have trained really hard throughout lockdown and I am eager to race again, and even more so now that I know I will be representing both Stacey and Lucy when I run. I very much look forward to sharing my future achievements with the Stacey and Lucy Foundation and would like to send a huge thank you to the Foundation for the Award.”

Tom competes at national and international level in judo. He is on England’s under 21 squad and aspires to become a top senior international competitor at the Olympics.

He said, “I am very grateful for the award and I look forward to using it to help fund more training camps and competitions in the coming year.”

Principal, Catherine Cole said, “Well done to Alice and Tom – both very worthy recipients of the award. It’s a huge achievement to be able to juggle their academic studies as well as their training schedules and do both brilliantly. I wish them the best of luck for the future.”