Jess Gillam performs at the College
Posted on 19 June 2019 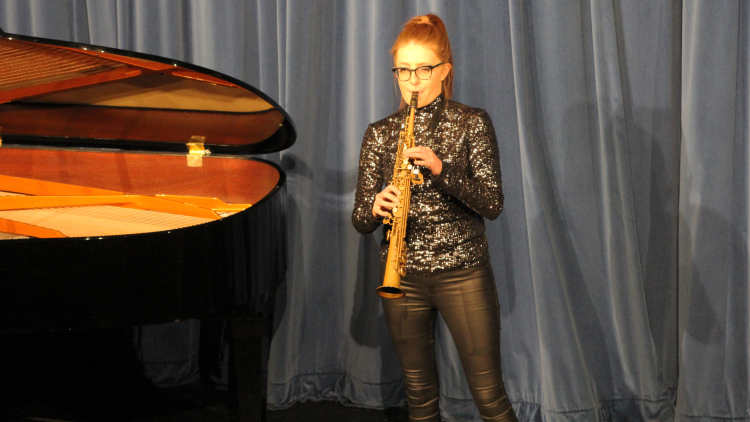 The College’s music department recently hosted saxophonist Jess Gillam for an afternoon of masterclasses with students, followed by an evening performance in the Prospect Theatre.

In 2016, Jess was the first saxophonist to become a finalist in the BBC Young Musician competition.  Now 20 years old, she is pursuing a solo career having closed the 2018 BBC Proms with three appearances in the ‘Last Night of the Proms’. She also performs with orchestras including the BBC Philharmonic, BBC Concert Orchestra, Royal Northern Sinfonia and Manchester Camerata.  She also hosts her own BBC Radio 3 show called “This Classical Life”.

Jess records exclusively for Decca Classics and released her first album “RISE” at the end of April, which features a selection of her favourite pieces ranging from Marcello and Shostakovich to David Bowie and Kate Bush.

The students Jess worked with during the afternoon gleaned an enormous amount of information and advice.  First year student Anna Bailey said of the opportunity, “I really enjoyed the masterclass with Jess, I found her advice very helpful, and she was extremely encouraging, suggesting new practice techniques and ways to improve posture and performance.  She gave me a lot of useful insight into sound quality and voicing, which will definitely help my playing all round. It was a real privilege to have a workshop with such a talented and inspiring saxophonist, and I am also thrilled to have seen her stunning evening recital.” First year music scholar Charlie Rothwell also enjoyed the experience, commenting, “Having the opportunity to have a masterclass with Jess Gillam allowed me to improve as a player both mentally and physically. She offered me technique tips which helped me raise my playing to a new level.”

For the sold out concert in the evening, Jess was joined by her pianist Zeynep Özsuca Rattle.  They performed a diverse programme, ranging from Dowland and Marcello, through to Ravel, Britten, Nyman, and Jess’ mentor John Hahn, who wrote the piece specially for her to show her virtuosity.  As well as the repertoire, the audience particularly enjoyed hearing Jess introduce their next piece, along with background stories about the work and amusing tales about her journey so far.

Speaking after the concert, Jess said, “It was such a privilege to meet and work with the young people at The Sixth Form College Farnborough.  Music is held in such high regard at this college; the value of music was deeply and truly appreciated and the enthusiasm and ethos of the students is fantastic!  I left the College feeling inspired and invigorated by the evident love for music and its power.  Music should not be an add-on to education, but central to it.”