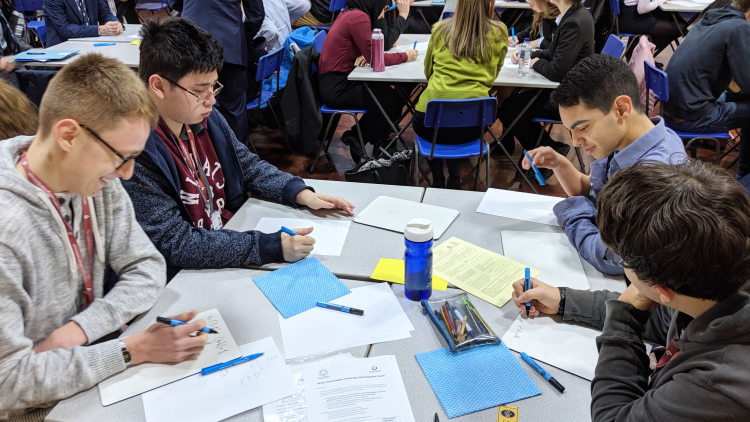 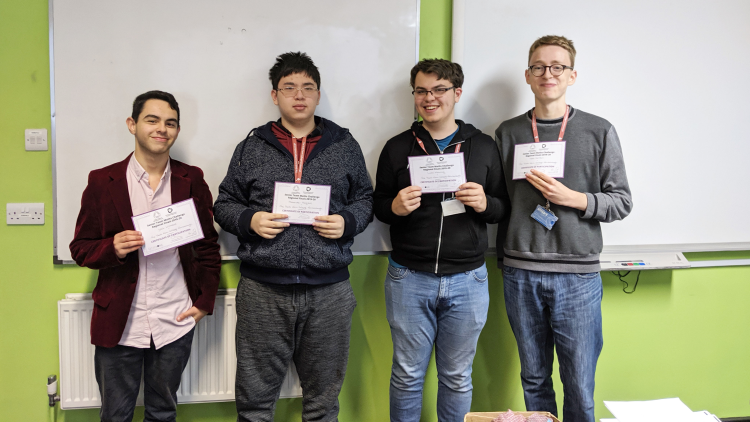 At the beginning of November, a team of students from Farnborough competed in the regional heats of the Senior Team Maths Challenge. The Senior Team Maths Challenge is a competition giving students the opportunity to tackle a variety of engaging activities while developing teamwork and communication skills. The team was made up of some of the College’s top mathematicians: second year students Luke Manning and Isaac Harrison and first year students Alexander Hargrave and Jack Nicholas.

The Farnborough team got off to a good start in round one; this was the Group Round, where they had ten challenging problems to solve in 40 minutes.  The next round was the Crossword Round, where the teams divided into two pairs to solve a mathematical crossword puzzle.  This sounds simple until you find out that one pair is given the across clues, the other pair the down clues and they are not allowed to discuss the questions with the opposite pair.  To add to the challenge, many of the clues were reliant on answers to other clues requiring the team to use logic and deduction to complete their grids, as well as needing to have a lot of faith in their teammates.

The final round was the Shuttle Round. Teams were divided into two pairs to solve four mathematical problems in eight minutes.  The solution to the first problem is required to solve the second problem and so on, so it not only tested their mathematical knowledge, but also their ability to work well as a team and stay calm under pressure.

The Farnborough team finished in an impressive fourth place out of 19 teams – congratulations!

If you want to see how you would get on in the Senior Team Maths Challenge, you can find the questions from previous years here.