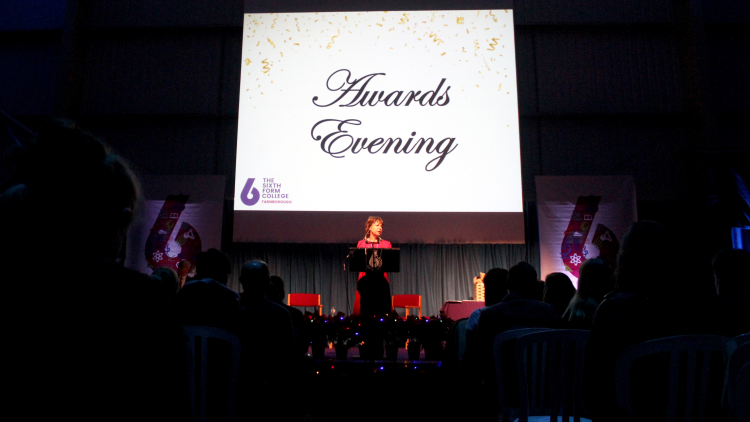 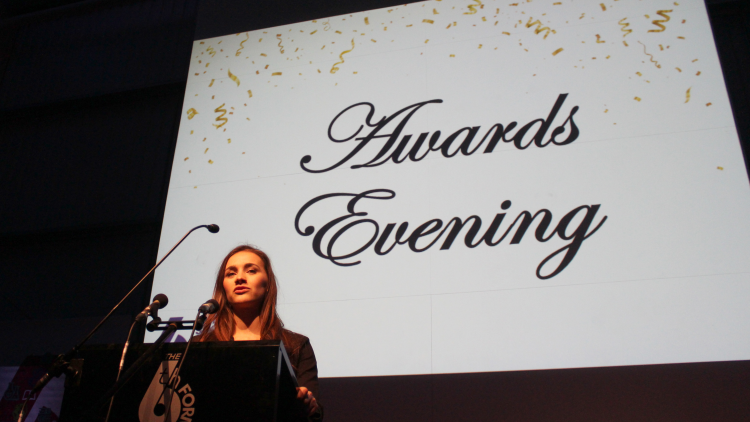 Our Guest of Honour, Grace Blakeley, speaking about her time at the College and her career 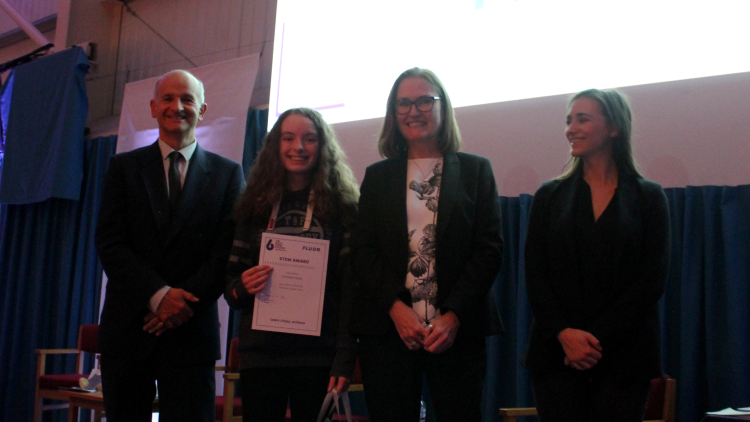 The STEM Award, sponsored by Fluor 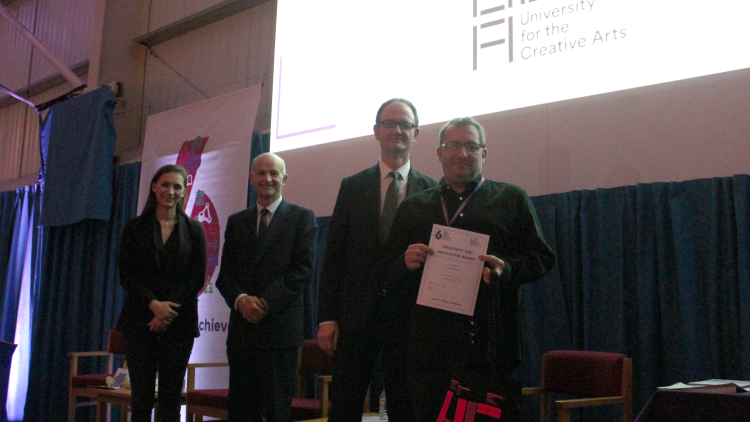 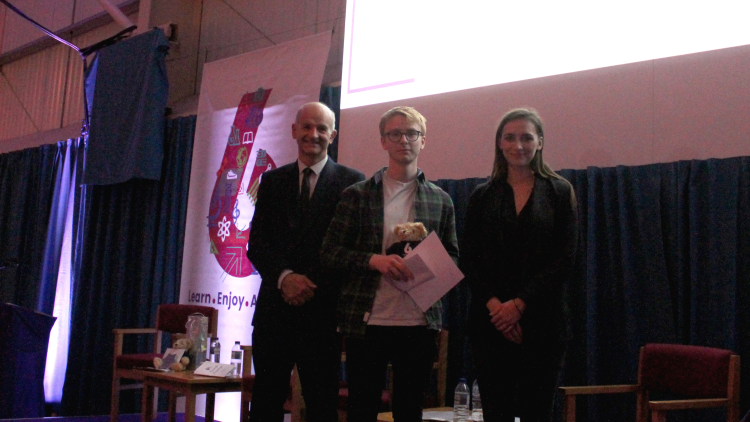 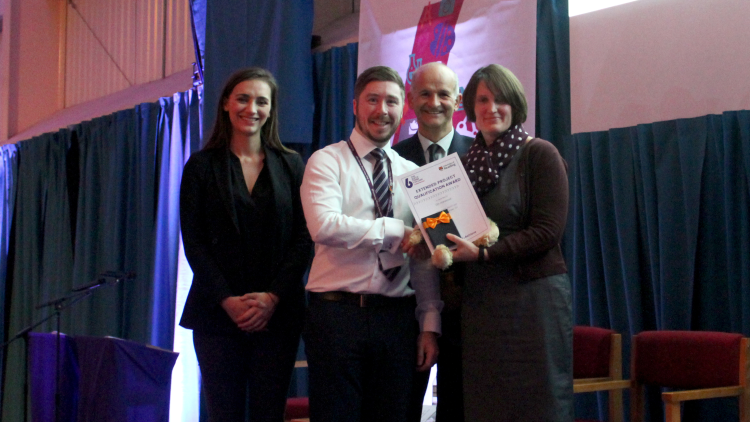 The Extended Project Qualification Award, sponsored by the University of Reading 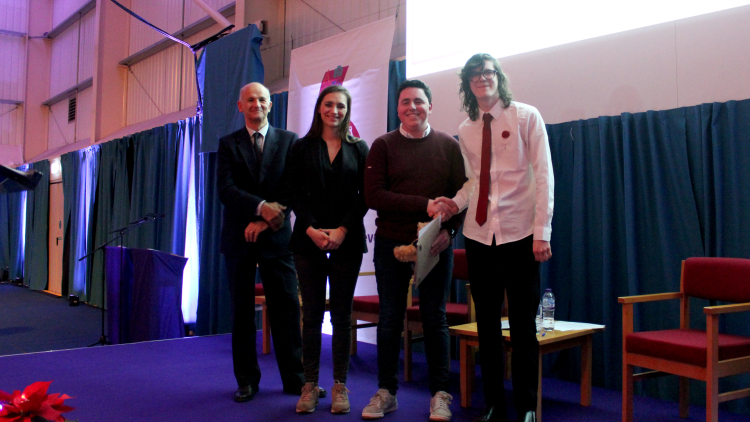 Happiful presented the Volunteer of the Year Award 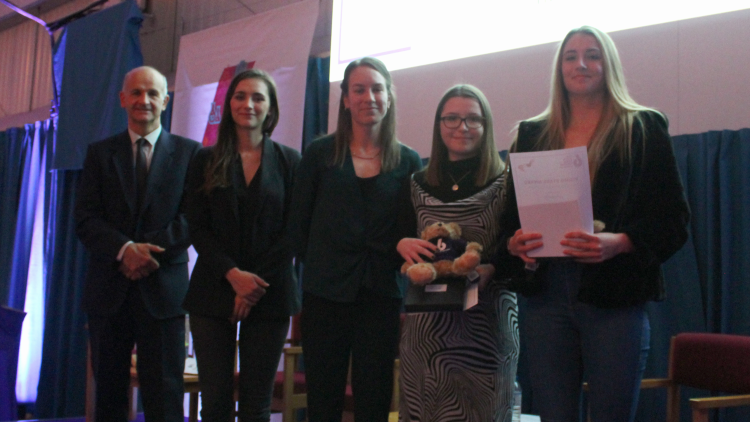 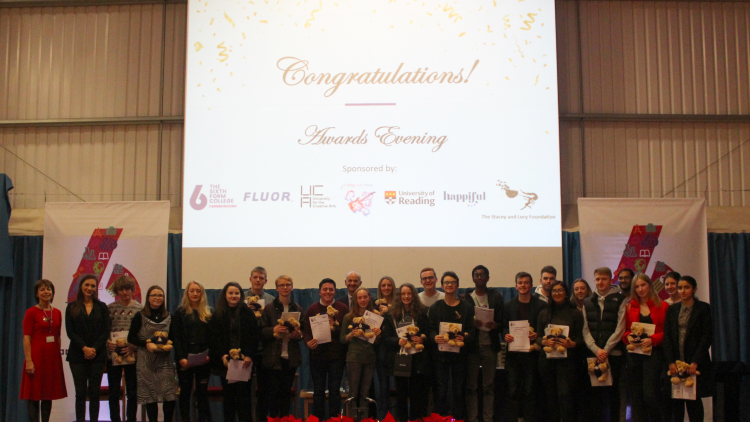 Our annual Awards Evening is a night of celebration dedicated to the remarkable achievements of all the students who left in the summer of 2019.  As well as congratulating all of our leavers on their successes, the College recognises those students who have truly excelled throughout their time here, both academically and personally.

Principal Catherine Cole welcomed students from the Class of 2019 and their families.  This cohort achieved a fantastic pass rate of 99.2%, with 30.7% achieving grades A* to A at A level.  Those who studied vocational courses achieved a 96.9% pass rate.  These are impressive statistics by any standard, but when you consider that they were one of the largest cohorts of students in the country and that there is not a minimum entry requirement to join Farnborough, it really is amazing!

We were delighted to welcome our Guest of Honour, Grace Blakeley, who studied at the College between 2009 and 2011.  She now works as an economist at the Institute for Public Policy Research and the New Statesmen’s economic commentator.  Grace is a prominent voice in the UK media and frequently features on both radio and TV programmes.  She also recently released her first book, ‘Stolen: How to save the world from financialisation’.  Grace spoke about her time at the College and how it influenced and inspired her career and got her to where she is today, despite a number of setbacks.

The following are the Class of 2019 special award winners - those whose achievements or contributions to College life can justifiably be described as outstanding.  The College is grateful for the generous support of the sponsors who shared the evening with us:

The STEM Award was presented by Helen Kilbride, Process Director from Fluor, to Charlotte Rowe who is now studying Engineering at Cambridge University.

Lucy Carter was awarded the University for the Creative Arts Creativity and Innovation Award by Professor John Pymm, UCA’s Pro-Vice Chancellor, for her incredible A level photography and textiles work.

Samuel Dawes received the Stephen Green Musical Volunteer Award for his contributions to the music department.  He performed for a huge variety of community projects during his time at the College, including carol singing at Frimley Park Hospital, Farnham Festival of Music and a number of community projects in Meudon, France.

The Extended Project Qualification (EPQ) Award, sponsored by the University of Reading, went to Elin Harwood for her grade A EPQ project about whether the Kensington system impacted on the reign of Queen Victoria.  The award, which was new this year, was presented by Amy Fairbrother, Reading University's Student Recruitment and Access Manager.

James Barber was awarded the Happiful Volunteer of the Year Award by David Bailey, a former student who is now working for Happiful.  James was given the award in recognition of the incredible 583 hours of volunteering he clocked up during his time at the College.

Lastly, the Rising Stars Award, sponsored by the Stacey and Lucy Foundation, was awarded to Renee Augier, Emily Jones, Rebecca Kennedy, Lucy Moores and Niamh Taylor.  The awards were given out on the evening by former student and Olympian, Steph Twell.

The Chairman of the Academy Quality Council, Peter Eyre, closed the evening by thanking not only the students, but all of the staff for what they do to make the College a brilliant place to study and work.

Congratulations to all our 2019 leavers!