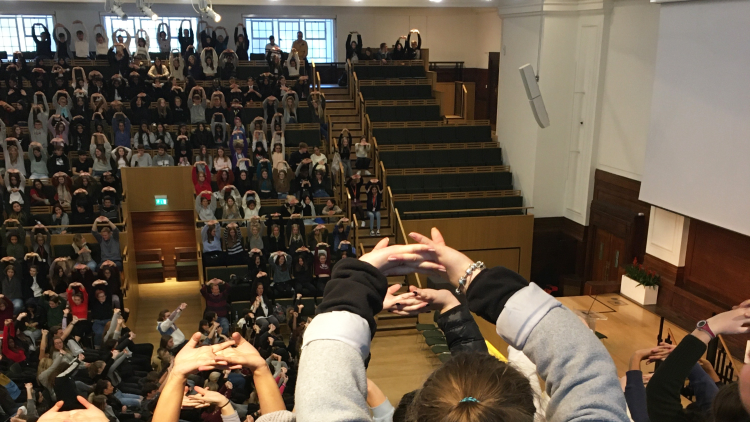 At the beginning of December, a group of 19 first year psychology students travelled to London to attend a psychology conference. Throughout the day there were a number of interesting talks covering a variety of different aspects of psychology.

Our first talk was from Dr Peter Lovatt aka 'Doctor Dance'. He spoke about how we can develop a stronger emotional connection with someone if we rhythmically dance in sync with them. We then all stood up and danced to see how we remember movement and patterns - it was a very memorable experience!

Following that was a presentation about magic and illusion which focused on how magic is not about fooling the eyes but confusing the brain. During the talk, we were all taught a magic trick to control the direction of our audience's attention.

The final talk of the day was all about hypnosis. The speaker, who is one of the world’s leading authorities on hypnosis, gave us a demonstration of his skills. It was really entertaining watching various members of the audience get hypnotised, including one of my fellow Farnborough students! They were given the challenge of trying to take a £20 note from the hypnotist’s hand using only their right arm; however, having been hypnotised into not being able to use their right arm, they were unable to do this.  I particularly enjoyed that talk as it also looked into the stereotypes of hypnotism and some of the potential risks of being hypnotised by someone without an official licence.

Nathan Kosbab, first year student made the following comment after being hypnotised, "I was sceptical about how ‘real’ hypnotism is but now that it is happened to me, I can honestly say that it was one of the weirdest, but best, things that I have ever experienced!”

The conference was really eye-opening and a lot of fun; we all learnt something new!