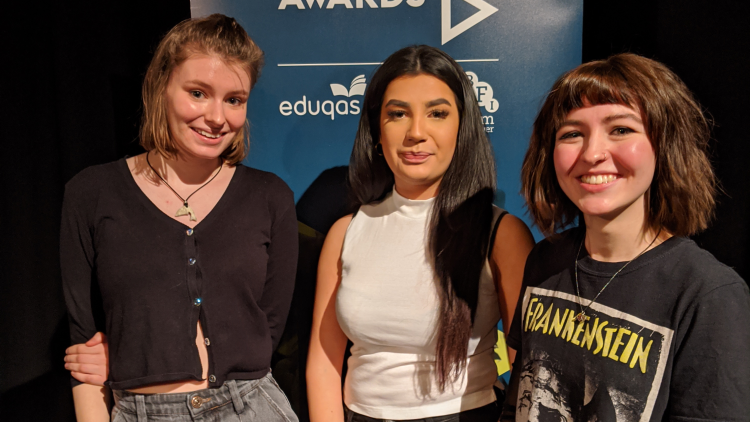 The New Year began with the sixth annual (WJEC/EDUQAS) Moving Image Awards at the home of film, the BFI Southbank in London. Run by the exam boards, the event is a celebration of the best moving image production work and screenplays produced by students aged 14-19 at schools and colleges from across the UK.

The event began with a ‘movie masterclass panel’ with a range of industry professionals including; Kate Leys, a feature film script editor with a wealth of experience working on a wide range of projects including Churchill (2017) and I am Not a Witch (2017); Anna Smith, a film critic and Chair of the UK Critics’ Circle Film Section; and Guy Bishop, a location manager whose credits include Fantastic Beasts: The Crimes of Grindelwald (2018) and Killing Eve. The panel provided our students with an excellent insight into the industry.

There were four main award categories that student work could be entered into and film and media students from the College were entered in three of those. Work nominated included Hannah Feibusch’s music video, Amarillo, Alicia Cross’ screenplay, Constance and Nell Jaques’ short film, Daphne. The judging panel were keen to highlight that the work shortlisted was outstanding and that being selected from the hundreds of entries received was something to be extremely proud of.

Although our students’ entries did not win in their respective categories, there was a special prize for ‘One to Watch’ for Nell Jaques’ chilling short film Daphne about an older woman who has a rather sinister hobby. Nell was praised for her narrative and characterisation and received a plaque and a cash prize.

Dan McGrath, Senior Curriculum Manager for media and film studies, commented, “It was a great event and it was wonderful to see our students’ work recognised on screen at the BFI. It was also inspiring to see what safe hands the creative industries are in, with so much talent coming through from across the country.”