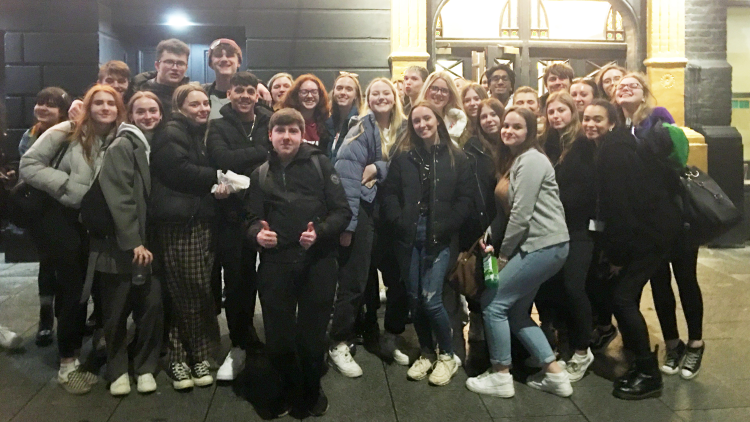 In early March, a coach full of first year drama students travelled to London to watch Frantic Assembly’s new play ‘I Think We Are Alone’. This trip was organised to inspire their work for component one of their course, which focuses of interpreting scripts. The play, written by Sally Abbott and co-directed by Kathy Burke and Scott Graham, is about our fragility, resilience and the need for love and forgiveness. Frantic Assembly are an internationally renowned physical theatre company. Their mission is to continue to learn and remain committed to making brave and bold theatre. The company is led by Artistic Director and Co-Founder Scott Graham.

After a lengthy journey through rush hour traffic, the students arrived at Stratford East Theatre - a very old venue, established in 1884 and described as a place that holds a political and revolutionary ethos. The foyer was alive with other students, regular Stratford-goers and everyone in between. The calling bell rang and with everyone seated under the large glistening chandelier and beautiful interior, the lights went down and the actors took to the stage.

The set was made up of large opaque movable rectangles that dominated the stage, dwarfing the actors and creating an atmosphere of a postmodern world. The play followed present day Londoners dealing with everything from cancer to insomnia, emotional pressure and alcoholism, with underlying themes of the toxicity of social media and class stereotypes. The play was spirited, vivid and extremely poignant, provoking tears at one moment and then making everyone cry with laughter the next. The dynamic, virile movements of the actors kept the students on the edge of their seats. The night ended with huge applause, smudged mascara and heated debates about the ending of the play.