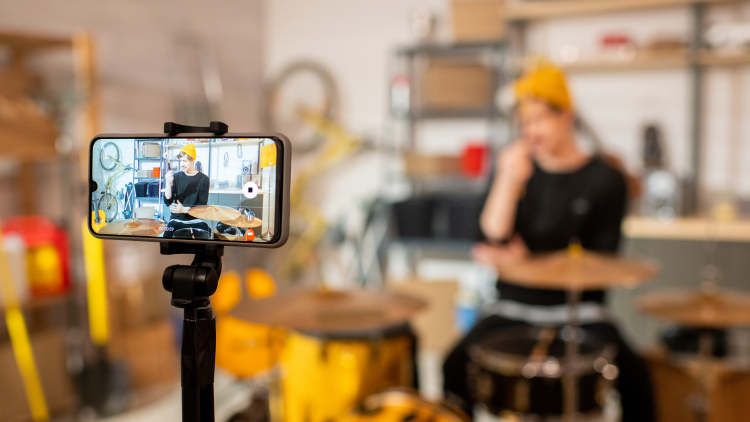 The College being closed and the country being in lockdown did not stop our talented music students from creating and performing musical masterpieces. With remote lunchtime concerts, virtual performances and a virtual summer lockdown concert, our music students were busier than ever!

"At the beginning of lockdown, myself and my music class kept talking about how we missed being able to perform with each other face to face. Scott and I had the idea of creating some sort of virtual performance using the amazing, diverse talent of our friends. For the first virtual performance, I began transcribing and arranging 'Don't Stop Believing' by Journey. I sent out parts to everyone who wanted to be involved, then each person filmed a video of them playing or singing their part. I then extracted the audio and mixed the tracks, with the help of Cosmo, and used iMovie to create a video to go with the sound using clips of everyone playing and singing.

After we posted the first performance on the music department’s Instagram account, loads more students wanted to get involved. I created several other arrangements, including, ’Writing's On The Wall' by Sam Smith, and, 'Love Me’ by the 1975.  As we did more virtual performances, we started to include choreography, and wore costumes too!  We had so much fun putting them together - it was a lovely way to stay in touch musically with everyone."

At the beginning of July, as the summer term came to an end, staff, students and their family and friends joined the music department for a concert like no other before. The virtual concert was the first of its kind for Farnborough and the first year musicians truly embraced the challenge of independently rehearsing and performing their pieces and compositions. Dr Jean Beers, Curriculum Manager for Music Performance led the audience through a fantastic programme; with highlights such as; the premiere of first year student Maddie McClements’ original composition ‘George Floyd BLM Song’ and first year student Andrew Denbigh’s performance of Chopin’s Revolutionary Etude op.12 no.12.

Some more examples of the fabulous work produced by our students over the last few months are shown below. We hope you enjoy them!