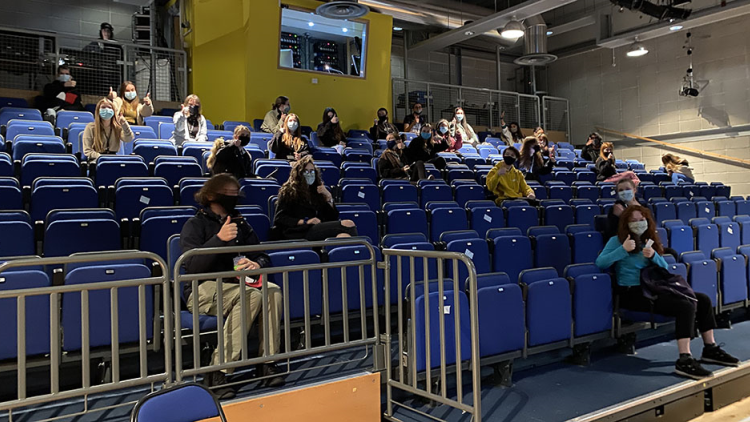 In September, for the first time since the pandemic saw the closing of theatres nationwide, the drama department took Farnborough students for a night at the Bristol Old Vic…almost. A level drama students were given the chance to experience a piece of live theatre altogether in a way we hadn’t before - by live broadcast. In a pre-COVID world in which the arts and entertainment sector continued to thrive, the opportunity to be sat amongst a crowd beneath the lights in a West End playhouse was one we may have taken for granted, so the chance to be immersed once again in the magic of performance felt refreshing and uplifting; even more so given the particular musical the department had organised for us to watch.

‘Romantics Anonymous’, adapted to stage by the wonderful Emma Rice; actress, director and theatre professional who previously worked as the Artistic Director at Shakespeare’s Globe theatre. A metatheatrical tonic for worries and stress, this bitter-sweet spectacle performed by a cast of less than ten actors, followed the story of Angélique and Jean-René, as they rekindled their love for each other…and chocolate. Through the ingenious use of lighting, multi-rolling and song, Rice created a piece of theatre which was a visual and audible délice while still conveying a powerful message about mental health and social anxiety.

Some of the themes explored in the piece included the effect of parental expectations, the relationship between discomfort and self-discovery along with the long-term impact of mental illness on daily life. The group described this ‘fantasy’ of a production as light-hearted and simple, especially through the use of direct camera address by the actors which made the experience all the more personal to the audience despite the distance between them.

Emma Rice once again stitched together a poignant theme with seamless design and a heart-warming storyline to create ‘a musical for people who don’t like musicals’, as described by one of the A level groups. If ‘Romantics Anonymous’ taught us anything, it is to trust ourselves in times of discomfort and change in the hope of a brighter future. Similarly, these circumstances demonstrate the resilience of the incredible producers, directors, designers and actors in the industry who, when the traditional framework of their jobs is taken away, will stop at nothing to adapt and overcome the challenges they face - challenges which no doubt compare in enormity to those faced by the disquieted duo in this musical. The spirit of the theatre remains - after all, the show must go on...

It has become clear that the coronavirus pandemic has enabled us to recognise how much we truly value our entertainment industry, and what a few hours of escape from our own narratives and immersion in another can do for the brain and the soul. With full digital performances available from Shakespeare’s Globe and the National Theatre’s archives we’ve been able to continue to indulge our love of the theatre.