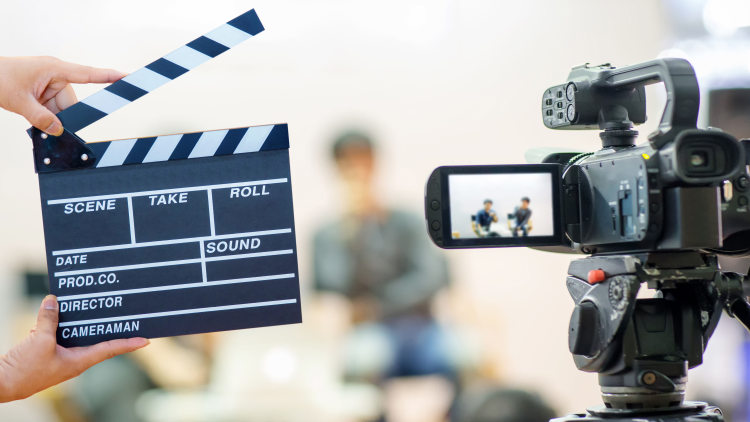 Last month, six of our second year film students were given the opportunity to work on a 360 film entitled, ‘Mythmaking’. The film, a project being produced by Master of Arts film students at UCA Farnham is a 360 narrative sapphic love story about who we are, who we wish we were, and who we could be. The film follows Luna, an anxious young adult, as she struggles with being present in her relationship with Kiran. The story takes place in the real world and in Luna’s mind, moving between her real and idealised self, until she finds a way to combine them both. When post production is complete, the film will be entered into the festival circuit and all the students who assisted with the project will receive a credit on the film.

Hannah Boast, one of the students who took part in the project commented; “Working on this short film was an incredible opportunity to understand some of the various roles that exist within the film industry. I got to work with the Director of Photography, Assistant Director and the Gaffer, and handle a range of the equipment, including a 360 degree camera. Whilst on set, I helped create a mirror maze and solve the logistics of both the set and how the props would fit in to help realise the director's vision. The crew were extremely friendly throughout and were always willing to answer any questions we had, sharing their knowledge to help us learn more about the different roles on set. The experience will benefit me greatly for my future plans in the film industry and I am very grateful for this opportunity”.

Bradley Darker, another one of the students who worked on the film said, “The experience was great. It was amazing to meet the cast and crew who were so professional and helpful. The work itself was very interesting and being on set with individuals with such talent was brilliant.”

The other students who took part in this fantastic work experience opportunity were James Teague, Viki Kovacs, Emily Andrews and Alex Baier.

The feedback from the production team was excellent. Victoria Simmonds, a former Farnborough student who was helping to produce the film said, “The feedback from the crew about the students who took part in the project has been great. They were very hardworking and professional and a pleasure to work with.”

Dan McGrath, Senior Curriculum Manager for media and film studies commented, “I was delighted when Victoria contacted me about this opportunity. Finding work experience in the film industry can be challenging at the best of times, so to be able to offer this opportunity for six of our students in the current climate was fantastic. It was great to hear such positive feedback from the crew and from the students who took part. I am confident this will spur them on to apply for more opportunities in the future”.

A Celebration of Christmas

to mark the festive seaso...

BTEC students take to the...