A Celebration of Christmas
Posted on 16 December 2020 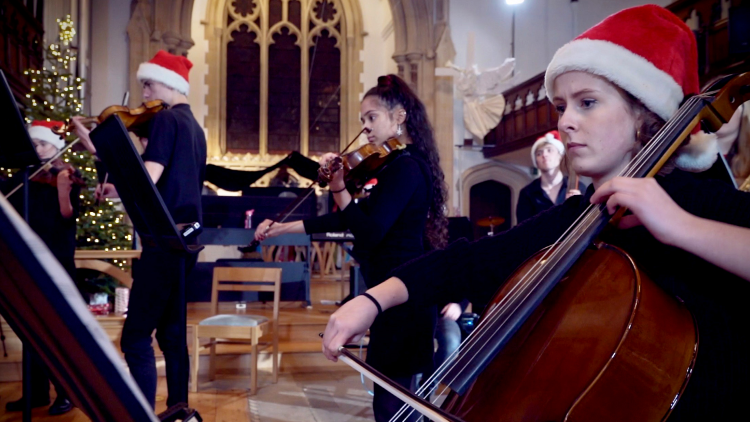 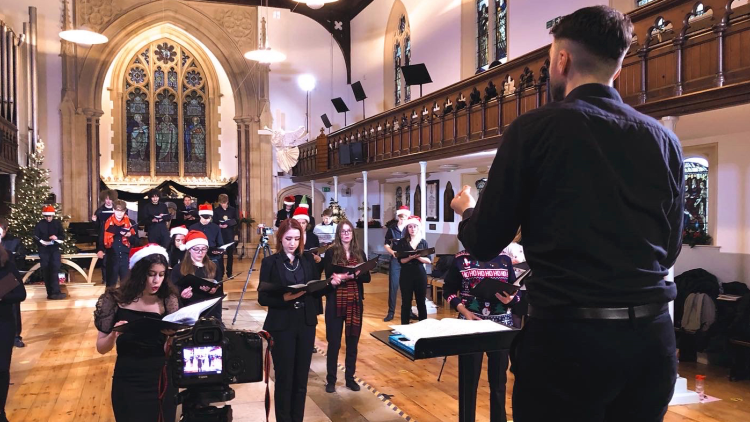 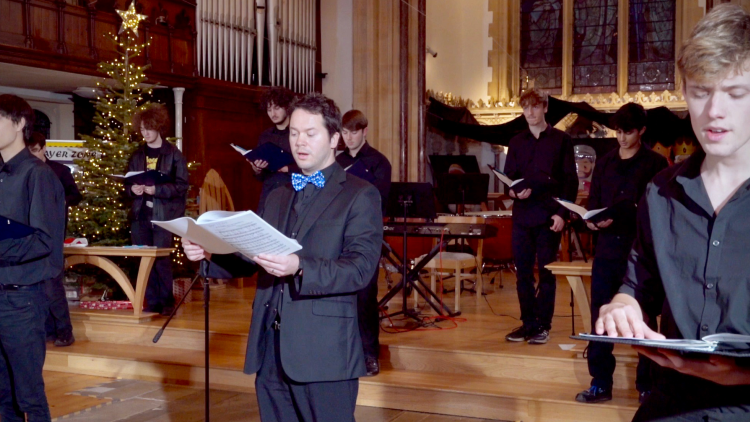 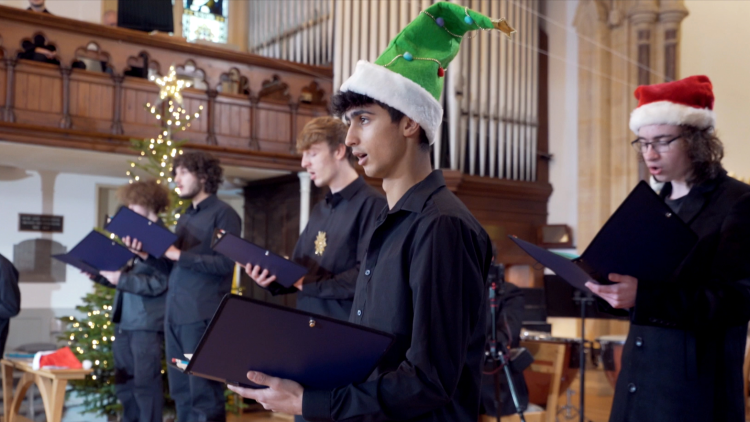 One of the highlights of the College calendar is the Christmas carol concert which takes place at the end of the autumn term each year. This year, due to Government restrictions on large events, the concert was unable to take place in the usual way, so instead our fantastic music department came together to create a special virtual concert. The film, which features a number of wonderful performances, has recently been shared with students and staff for their enjoyment.

On a typically wintery day in December, our music enrichment students made their way to St Peter’s Church in Frimley to record the College’s first virtual Christmas celebration concert. The first performance of the concert was given by the choir who delighted us with the traditional carol, ‘Hark! The herald angels sing’. Conducted by Richard Robbins, the College’s Music Enrichment Support, the carols were accompanied on the organ by Stuart McSweeney, our Music Curriculum Manager, with fanfares performed by student brass players.

The College’s Principal, Catherine Cole, then read the poem ‘Christmas is Different for Everyone’, which was written by first year student Harrison Taylor, one of the winners of this year’s Christmas poem competition.

We were then treated to some re-imagined jazz carols including ‘The Shepherd's Carol’, which the choir performed acapella. The atmosphere that the students created was electric - you could have heard a pin drop during second year student Maddie McClements’ solo in ‘Away in a Manger’.

BTEC music performance students Charlotte Clarke and Ethan Fleming then treated us to a brilliant version of ‘Last Christmas’ before the Chamber Orchestra’s uplifting version of Mitchell Parish’s ‘Sleigh Ride’. Second year Music Scholar, Julian Brandon, was a featured soloist, playing the soprano saxophone in front of the Church’s impressive 8ft Christmas tree. This brilliant performance was followed by a reading of ‘Twas the Night Before Christmas’ by Matt Sheppard, Director of Faculty.

The Big Band then gave their renditions of ‘Have Yourself a Merry Little Christmas’ and ‘Santa Claus is Coming to Town’. They filled the church with the sounds of saxophones, electric guitar, which were accompanied by dazzling vocal performances from soloists first year students, Sandro Shargorodsky and Elle Richmond, and second year student, Rania Bouzekraoui. Charlotte and Ethan then treated us to a cover of Elton John’s hit, ‘Step into Christmas’. First year student Riya Phumbuhang, who also won this year’s Christmas poem competition, then read her piece ‘Corona Christmas’.

The event culminated in the Choir signing well-known Christmas carols, ‘We Three Kings’ ‘Silent Night’, ‘Once in Royal David’s City’ and ‘Oh Come All Ye Faithful’.

Second year A level music student and ‘Musician in Residence’, Lou Newton said, “Having the opportunity to record the College’s first ever virtual Christmas concert was a privilege. The hard work that everyone put in to make this all happen made the event even more special. The brass carols were a particular highlight for me, and the Church acoustics gave the choir pieces a beautifully haunting quality.”

Matthew Sheppard, Director of Faculty, commented, “The students sounded absolutely sublime as their voices soared through the St Peter’s Church. One truly moving piece was 'The Shepherd’s Carol' which really set the tingles in motion and encapsulated the festive season perfectly.”

Principal, Catherine Cole said, “After an incredibly difficult year, it is so wonderful that we are still able to celebrate the festive season with our very first virtual Christmas concert.  It has been lovely to see students from across the College community coming together to create this marvellous concert. The programme was so diverse, from traditional carols to cover versions of some of the nation’s favourite Christmas songs. I really hope everyone enjoys watching and listening to the concert as much as I have. The College would like to say a special thank you to Lighting Cameraman, John Collins, for recording the performance and to St Peter’s Church Reverend, Stuart Thomas, for allowing us to perform in such a magnificent venue.”