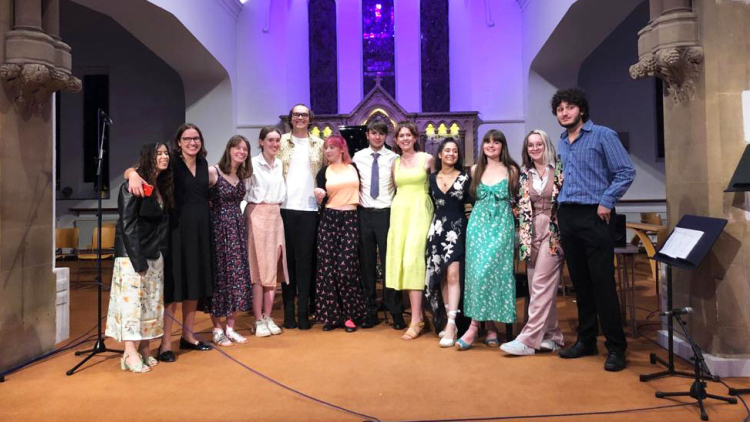 In early June, after 18 months of not be able to perform to a live audience, Music Scholar students hosted a socially distanced performance at St Peter’s Church in Farnborough. The show was also live streamed to a wider audience. The College’s Music Enrichment Support, Richard Robbins, led the evening, introducing the performers and their choice of repertoire.

Drummer extraordinaire Alex Tartterlin and Young Guitarist of the World finalist, Tom performed next. Alex played a piece from Swedish rock band, Meshuggah and Tom performed composed pieces on the electric guitar, with his own mixed backing track. The dexterity and coordination of both was riveting to watch. To wind down the first half, singer Rania Bouzekraoui took us to Holland via Duparc’s lilting ‘L’invitation au voyage’ and Sandro Shargorodsky dazzled us with a spectacular performance of one of Chopin’s ‘Variations Brillantes’, leaving the audience wanting more.

Abbey Hardy opened the second half with a beautiful rendition of the second movement of Camille Saint-Saens ‘Sonata in D’. First year piano scholar Mixtli Monroe then played Schubert’s ‘Impromptu no. 3’ superbly with his sensitivity and care captivating the audience completely. This was followed by a piece written by Paris for piano, violin, cello and speaker inspired by her love of Jewish music. Her piece, as haunting as it was vivid, demonstrated a mature technical understanding of the instruments and introduced us to her fresh and chilling sound - the audience were completely spellbound. Julian Brandon, playing the tenor sax, equally dazzled with an elegant and sensitive performance of Debussy’s ‘Syrinx’, a piece originally written for the flute. Joe Edwards and Maddie McClements then took the audience to the West End with two charming and well told performances of ‘Music of the Night’ and ‘Can’t Help Lovin' Dat Man’.

Maia Wilson, another trombone scholar, then performed with Mixtli accompanying. They gave a beautifully shaped and sincere rendition of the Swedish composer Jan Sandstrom’s piece ‘Sang Till Lotta’. Julian and Sandro, then performed Julian’s A level composition; an incredibly catchy and witty piece that highlighted the pairs’ instinctual performative brilliance. The evening was rounded off warmly by Musician in Residence, Lou Newton's version of Billy Joel’s classic ‘New York State of Mind’. She brought together fellow students, Paris, Ellen, Joe and Julian into her arrangement and the audience loved it.

All the students showed immense courage, skill and maturity in their performances and their commitment to their craft is both moving and inspirational. A huge thank you to the church of St Peter’s Farnborough for hosting us and to Kim, from the church, whose help was indispensable when it came to the live stream and taking care of the audio for the evening.

Matt Sheppard, Director of Faculty commented, "It was so lovely to once again be part of a live performance. The range of talent was incredible and a perfect tonic for a summer evening. To hear original compositions and a more contemporary mix was wonderful. Thank you to Richard and all the students for a memorable evening and we wish the second year students good luck in their onward journeys."

At The Wind Tunnel Projec...