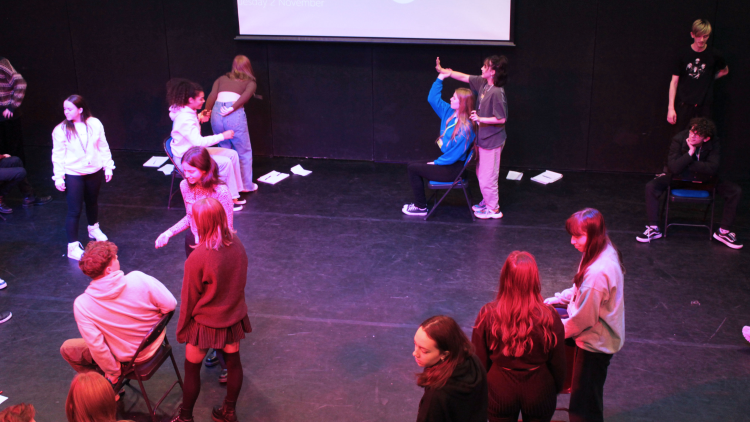 At the beginning of November, the Performing Arts department hosted The Paper Birds Theatre Company in our Prospect Theatre. The Paper Birds are a multi award winning devising theatre company with a social and political agenda. Since the early 2000s, they have been creating and performing fantastic, thought-provoking theatre and well as running a creative learning programme. The company ran a workshop for our second year drama students before performing their latest production, ‘Broke’.

‘Broke’ is based on interviews taken across the UK in 2014 and uses real life stories from the front line of poverty and debt. The show is a heartfelt and urgent look at the debt of a Britain, which educates its audience on the political events that have shaped our capitalist system in the past 50 years. It takes a hard look at the plight of displaced families and those suffering from gambling addictions in a well-researched and poignant piece of political theatre.

During the workshop, students had the opportunity to explore the process of The Paper Birds’ approach to developing their work. They focussed on the themes covered in ‘Broke’ and debated their views on whether or not a class divide still exists in Britain today. The session culminated in the students writing and performing their own verbatim texts to discuss this issue.

Rebecca Lewis-Verebelyi, Curriculum Manager for Drama and Theatre commented, “We were thrilled to have The Paper Birds perform in our Prospect Theatre this month. The students were gripped by the performance and cheered loudly at the end.  All agreed that The Paper Birds’ unique approach of mixing factual details with fantasy created an entertaining, memorable and educational experience for the audience.”

Run a workshop and perfor...