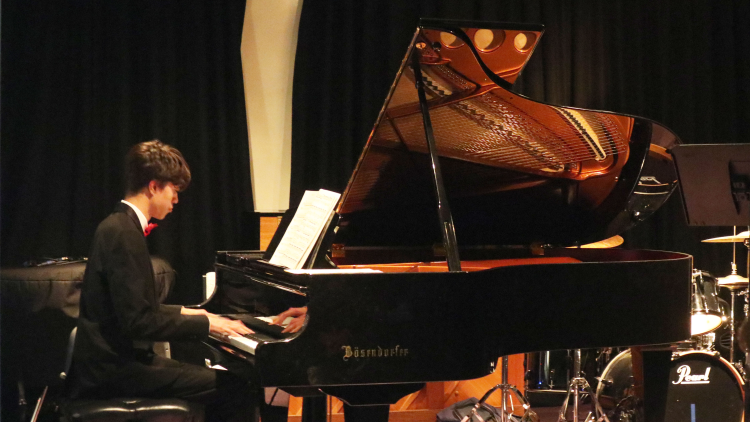 At the beginning of November, the music department held the first Scholars’ Concert of the year. The Scholars, some of whom were accompanied by guest accompanist Ben Giddens, performed in front of friends and family in the College’s Recital Room. Ben is the current Associate Organist at St-Martin-in-the-fields, London and a piano teacher at The University of Reading. The evening’s performances included work from composers Frank Bridge, Rachmaninoff and Casimir Liberski. The crowd were also blown away by two original compositions: ‘Chivo’ by second year student Sandro and ‘Soaring’ by second year student Tom.

Second year Music Scholar, Mixtli said, "The concert was an amazing experience - it felt so good to perform live again! A huge congratulations to everyone for the effort they put in to create such a fantastic event!"

Richard Robbins, Music Enrichment Support commented, “The Scholars rose to the occasion with their trademark tenacity, originality and drive; these events are crucial for the development of young performers and showcase the best talent in the College. I thank them, their teachers and their parents for their continued encouragement and support. A further thank you to guest accompanist Ben Giddens who worked with the Scholars during the afternoon to hone their performances. I look forward to welcoming all the parents and supporters of our Scholars to our next show in early February 2022.”

Curriculum Manager for Music, Stuart McSweeney said, “Congratulations to all the performers; it was a wonderful evening of musical performances with both first and second year students displaying such maturity and character to their playing. Having students playing a mixture of different genres, including some original compositions, really showed the diversity and talent we have within the department!”

The night was a great success and a brilliant taster of the performances to come!  Please keep an eye on the College calendar for more details of our upcoming events