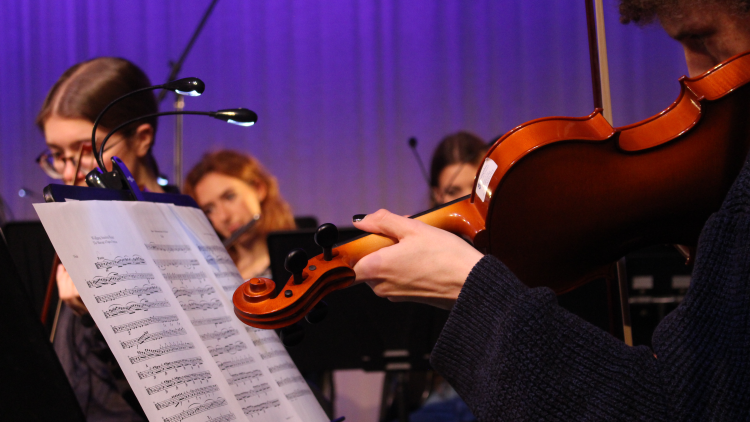 At the end of November, the College’s Big Band, Chamber Orchestra and Contemporary Voices group came together to perform in The Prospect Theatre. The evening included music inspired by the sixties and Vienna. In addition to the fantastic ensemble performances, a handful of students also performed solos pieces and in small groups.

As the audience took to their seats, second year music scholar, Sandro, played a selection of jazz pieces, setting the mood for the evening.

The Big Band then played a wonderful compilation of well-known jazz arrangements, including ‘Sir Duke’, ‘Respect’, ‘The Sesame Street Theme’ and ‘At Last’ with second year student, Yaz on vocals. Following the Big Band was the Jazz Ensemble trio, made up of Sandro and first year students Remy and Charlie, who amazed the audience with an original composition by Sandro called ‘Chivo’.

After a short interval, the Chamber Orchestra whisked the audience to Vienna with the overture from ‘The Marriage of Figaro’ by Mozart and the first movement of Schubert’s ‘Unfinished Symphony’. Solos and duets then followed showcasing the talent of the students here at the College with songs including ‘Superstition’, ‘I Put A Spell On You’ and ‘It Takes Two’.

The night was also a success for the debut of the Contemporary Voices group. Fitting in perfectly with the sixties theme, the group sang a medley of songs from the musical ‘Hairspray’ before ending the night on a high note with a rendition of ‘Don’t Stop Believing’.