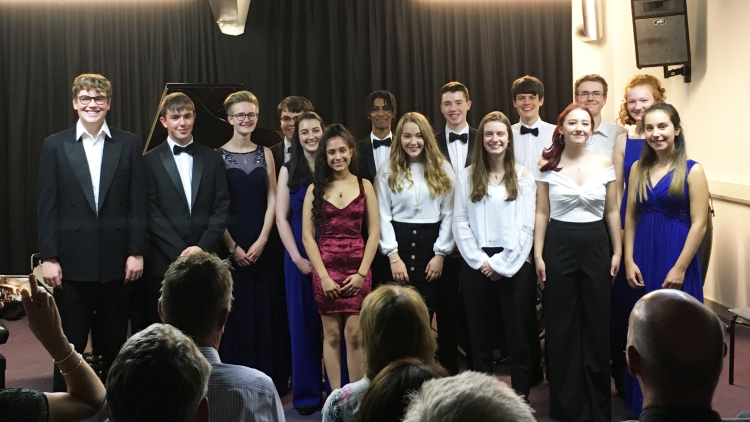 In early October, The Recital Room in the music department played host to the first Music Scholars’ concert of the year.

In addition to featuring established second year scholars, the evening announced the arrival of the College’s first year scholars, who performed together for the very first time. Despite this, there were no signs of nerves as all the students reached astonishing levels of performance. The enthusiastic audience was treated to an eclectic and vibrant programme performed with real commitment and musicianship. Works ranged from Bach to John Williams, via Mozart, Bellini, Poulenc, and Saint-Saëns, amongst others.

Paris Dhillon, first year student, who performed the first movement of Kabalewski’s Violin Concerto in C said, “I really enjoyed performing in the first Music Scholars’ concert with like-minded musicians. The music department at Farnborough are very supportive of each other and I feel at home already. I am already looking forward to the next Farnborough music event!”

Parents, staff and friends were moved by the level of maturity and assurance heard in the students’ readings of works on a number of different instruments. Julian Brandon, first year student who performed the first two movements of John Williams’ theme tune from ‘Catch Me If You Can’ on saxophone commented, “The scholars programme at Farnborough has really sparked my interest in music and motivated me to become a better musician. I am surrounded by incredibly talented people, and the atmosphere here is wholly constructive and friendly!”

Sophie Kozlowska, second year student, who performed the third movement of Hindemith’s Flute Sonata said of the experience, “Performing in the scholars' concert was a great opportunity and the standard of music was truly fantastic. It was enjoyable for everyone and there was such a welcoming atmosphere.”

Jean Beers, Subject Tutor for music, was highly impressed with the spectacular young musicians at Farnborough and the broad range of the musical genres showcased. She was touched to experience how highly developed the scholars' musical personalities were. She commented how impressed she was with all the students and their instrumental teachers' support, adding, “We are pleased that Farnborough attracts some of the UK’s finest young musicians from the area, who are given wonderful opportunities to perform and to develop further as musicians. The artistic success of this first scholars’ concert has been a huge inspiration in the department, both for staff and students. We look forward to next term's scholars’ concert in partnership with the Royal Academy of Music.”