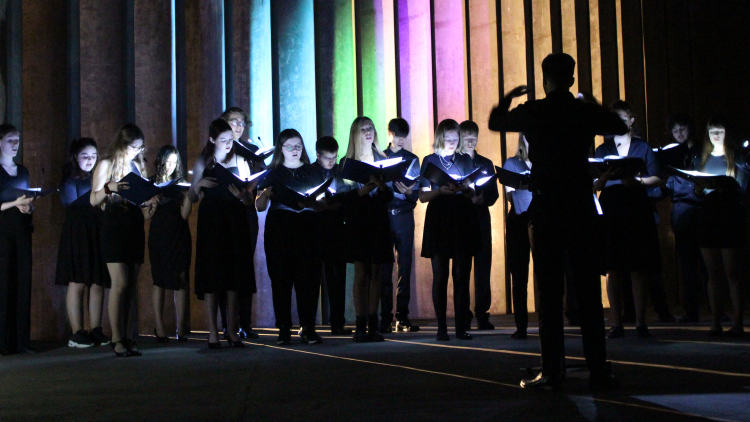 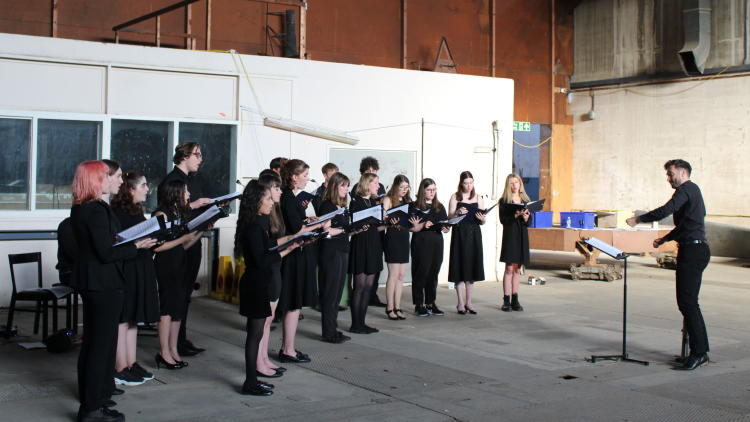 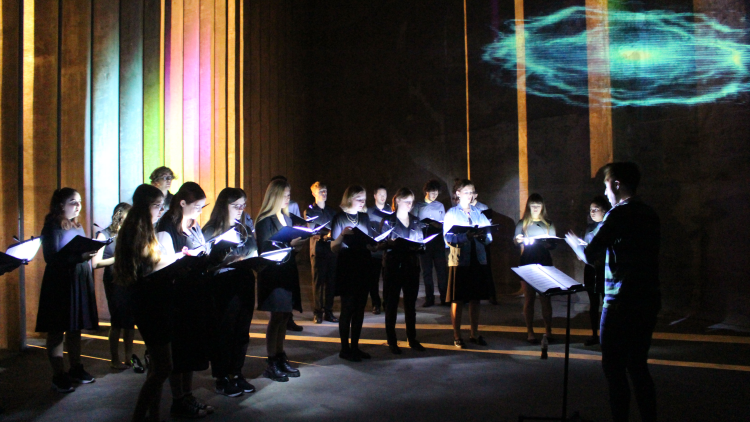 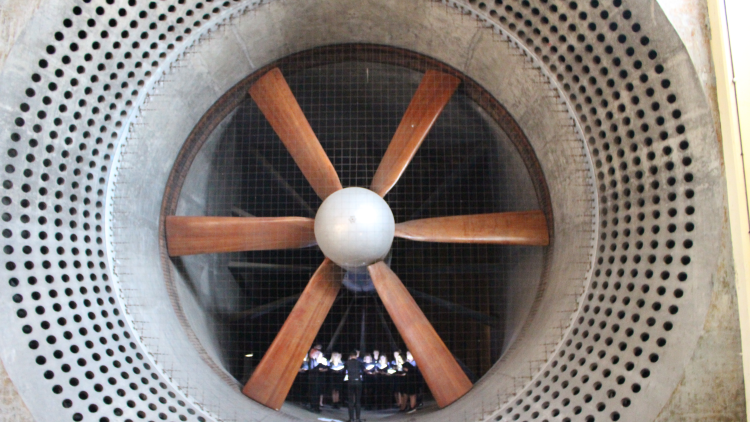 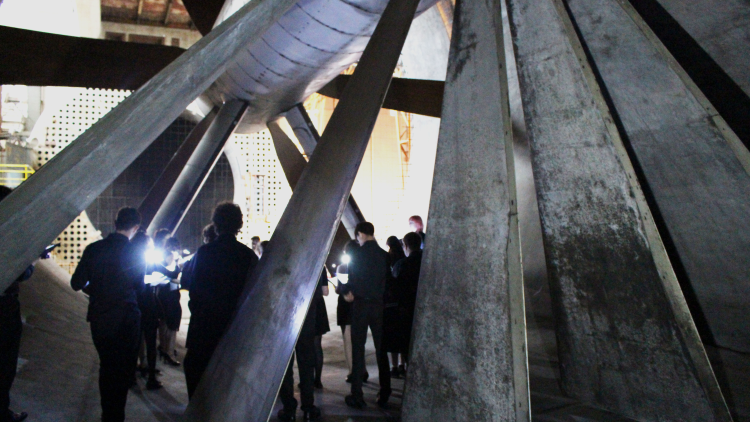 At the end of June, The Wind Tunnel Project in Farnborough hosted a live music event for the second time in its history. The College’s Chamber Choir were invited to perform there, and are the first and only choir to perform in the space! The aeronautical engineering works, which was built in 1930 and decommissioned in the 1990s, is often used by film and television production companies as a filming location.

To honour this amazing venue, the choir sang music on the theme of journeying. The concert began with music by Canadian composer Sarah Quartel and American Mac Wilberg, amongst more well-known choral works such as Mozart’s Ave Verum Corpus. The choir then performed with tenor saxophonist second year student, Julian Brandon in a performance of Ola Gjeilo’s majestic and soaring Evening Prayer. They were accompanied by first year student, Mixtli Monroe and Stuart McSweeney, Curriculum Manager for music.

The audience was then invited to follow the sound as the choir moved to a different location within the wind tunnel. As the choir and audience shifted positions, Julian played an arrangement of Debussy’s Syrinx on saxophone off stage, hidden behind a huge circular concrete hole. The interweaving and beguiling lines bewitched the audience as they tried to work out exactly where the mysterious and enchanting sound was coming from.

The choir then performed extracts of Kerry Andrew’s Dusk Songs from underneath the biggest mahogany propeller in the world, with each blade weighing 600kg! The reverberating acoustics gave depth to the interlacing lines of the ethereal soprano line. After this, the choir accompanied soloist second year student, Joe Edwards during the final movement of the piece, his round and beautiful tone soaring through the space.

For the final part of the concert, a set of acapella pieces, the choir and audience moved positions again, this time into the main Wind Tunnel hall; a gargantuan and slightly sloped concrete space, with floor to ceiling curved pillars at either end.

The cathedral-esque and industrial majesty of the giant concrete hall had been enhanced by lighting and projections, which lit up the pitch black space, masterminded and created by Maisie Richards, the College’s Recording Studio Manager and Max Juan-Balch, Deputy Theatre Technician. Here, the choir sang the rest of its set, music by Eric Whitacre as well as James MacMillan, Barry Ferguson and Stephen Paulus. O Radiant Dawn, an Easter Anthem, burst across the giant acoustic, echoing throughout the vast hall. Following this, the more cerebral Hope Faith Life Love by Eric Whitacre spun its close harmonies around the hall. A Child’s Prayer, a piece dedicated to those who lost their lives during the Dunblane disaster in 1996, featured moving solos from second year student, Maddie McClements and first year student, Julia Curry, whose angelic voices blended together seamlessly. The concert closed with Eric Whitacre’s Sleep and a piece of plainchant Te Lucis Ante Terminum, which the choir sang as they left the stage, voice by voice dropping out, concluding with a solitary solo ‘Amen’ from a great distance away, the effect was spellbinding.

Stuart McSweeney, Curriculum Manager for music, commented, "What a wonderful evening showcasing the excellent professionalism, talent and togetherness of the Chamber Choir in their first public choral concert since December 2019. The enchanting repertoire, selected by Richard Robbins, was matched by the superb blend of voices in the haunting acoustics. Huge congratulations to all involved and for Richard's vision and creation of such a brilliant event especially given the challenges of social distancing."

Richard Robbins, Music Enrichment Support and Conductor for the evening, said, “Everyone sang their hearts out - the space elevated the performance and inspired the singers. I’m so proud of all the students who took part, whose hard work and dedication made the performance possible. Their enthusiasm and quiet pride was inspirational to see and hear. It was an experience that none of the singers, or those in the audience, will ever forget.”

Thank you to the members of the Farnborough Air Sciences Trust who came to provide security and technical support for the event and to all the College staff involved in getting everything set up.

Author speaks about his b...

Students take part in a r...