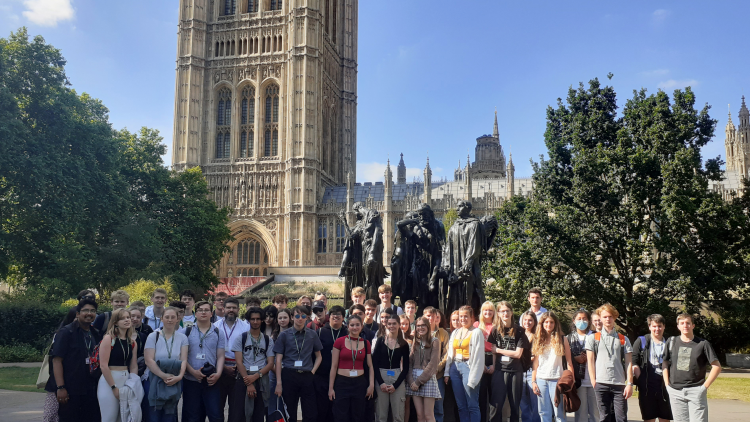 Forty first year A level politics students recently travelled to London to visit the Houses of Parliament and the UK Supreme Court.

They started with a tour of the UK's highest court where students were particularly excited to be able to sit in the same chairs as the top judges in the UK!  Students were permitted to access ‘Court One’ where they watched a live case being heard.  This was followed by a walking tour around Whitehall where, despite the crowds, students managed to see Downing Street, Portcullis House and New Scotland Yard.

The real highlight of the tour was Parliament itself.  Students were shown both the House of Lords and the House of Commons.  It was Home Office Question Time and so students were able to watch both Priti Patel and Yvette Cooper in the Chamber.  Other famous politicians spotted included Iain Duncan Smith and Tanni Grey-Thompson.

First year student, Matt Pickard, said, "My personal highlight was visiting the Supreme Court, and getting to sit in the seats of the Justices – it was amazing!"

First year student, Rose Cant, commented, "It was a very informative trip; it helped me to understand what different parts of Parliament do, and how they work together."

Nathan Scott, Curriculum Manager for politics, said, “Once again our students were polite and courteous throughout the trip.  They were an absolute credit to the College.”